Almost February and our front door has been without holiday decoration for a few weeks now. Time for a mama and Daphne art project that will breathe new life, and some bright colorful images of love into our home.Valentine’s Day is just around the corner so… we decided to make a bright, happy heart and hang it on the door! 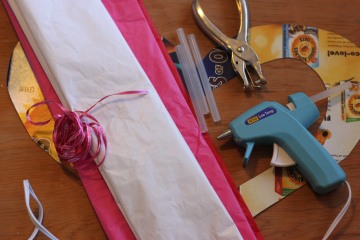 Cardboard- I used a cereal box but I recommend something a little more sturdy.

Red, White and Pink Tissue paper (a sheet or two of each)

Something to write with ( I used crayon)

I rescued a cereal box from our recycling bin- opened it up and folded it in half. I drew the outline of half a heart and cut it out. Then drew a second heart and cut it to open the center of the wreath.

Next I cut up the tissue paper  into little 3 by 2ish strips. Those strips were then folded in half and given a little twist in the middle so each end became a  little fluff. I folded the heart in two and punched a hole so that the wrath would hand from two places ( I decided it would be more balanced this way.)

After plugging in the hot glue gun I started putting glue down on the cardboard and placing the tissue fluff on (twist down- fluff up.) This continued around the entire heart, though I made sure not to cover the holes I punched.

After the whole wreath was covered I put some sweet ribbon through the holes and tied a little loop. Then I hung on the front door and noticed that it wasn’t staying flat so I put a little tape in the center and secured it to the door. 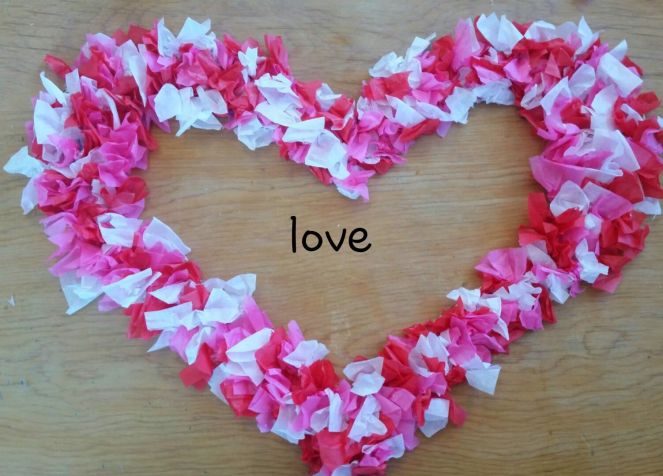 It took a little longer than I expected it to, but I got the look I wanted on the wreath so it’s fine.

This was a fun project for me- it was meditative and I really needed it.

The cereal box cardboard wasn’t the best choice to hold shape (it folded on the fold of the box- go figure) so I would use a more sturdy cardboard next time.

Give this sweet project a try, with or for someone you love- Or just to brighten the day of someone who sees it hanging on your door.

A little about me…

Welcome to The Fancy Elephant Life! My name is Hope and this is my place to teach, learn, write and spend some time while my little ones nap and I have my afternoon coffee. Please, won't you join me?